With the start of October comes not only Halloween decorations, but every Destin fisherman’s favorite time of year. Established in 1948, The Destin Fishing Rodeo is the ultimate fishing tournament for saltwater anglers of all ages! People come from across the globe to enter the tournament for a chance to win their share of over $100,000 in awarded cash and prizes. The Rodeo is held from October 1st thru the 31st, and daily weigh-ins are located at A.J.’s Seafood and Oyster Bar from 10am – 7pm.

Hang ‘Em High every Saturday in October. It’s time to put all that muscle work from the summer to the test. If you bring in the largest shark of the day, you’ll get a cash prize! What are you waiting for? Start reeling!

Aboard the Backlash, your captain will be Chris Kirby and his professional team of fishermen. Just because summer is over, doesn’t mean the fishing fun has come to an end. Book your fishing trip today to take part in this yearly event! 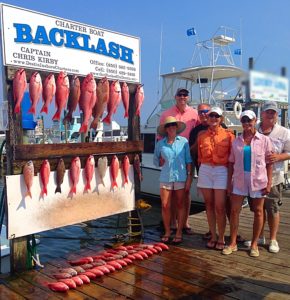 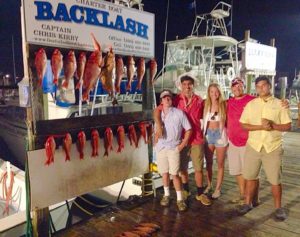 Finally, red snapper season has been announced for federal waters. The Charter Boat Backlash will have 46 days for harvesting Red Snappers! These trips book up the fastest! Call ahead to be sure you won’t be left at the dock.

We will also be running night time Red Snapper charters. The Backlash is equipped with underwater lights and floodlights on the deck to light up the night. These trips are a great way to beat the heat and relax. Red Snappers bite just as good and sometimes better at night when the water gets hot in the summer.

If you are vacationing on the Emerald Coast, THE place to catch that trophy Red Snapper is on the Charter Boat Backlash. Captain Chris Kirby has a 100% success rate on ALL Red Snapper fishing trips. Call now for available dates.

Catch y’all on the water!

Amberjack Season is in Full Swing! The Amberjack fishing has been awesome! The average amberjack weight is 40-50 lbs. These reef donkeys will give you a fight like no other. The Charter Boat Backlash is the boat to fish with if you want to target trophy Amberjacks in the Destin Florida area. Along with Amberjack fishing the triggerfish are still in season and we have been catching some beautiful triggers as well.

Don’t get left at the dock, book your trip on the Charter Boat Backlash with Destin Offshore Charters. Book it now! (850)685-9368 The 2016 Destin Flathead Classic recently wrapped up its final day with a record breaking fish setting a new standard for the annual competition. DeeDee Phillips, with help from the crew aboard the Blanchita, reeled in a staggering 96.6-pound cobia on Saturday morning―blowing her previous 40 pound personal record out of the water. Oddly enough, the fish was found swimming alone and was almost mistaken for a shark because of its size. Phillips recounted the tale on the docks at the weigh in, saying the almost 100-pounder took 45 exhausting minutes to reel in and net. Not only did Phillips take first place for largest fish caught, but the Blanchita itself also took first place for the Big Three, with three fish weighing in for a grand total of 228.9 pounds! Phillips was humble though, insisting that she couldn’t have done it without the help and support of the crew.

After the weigh in, all the competitors and spectators alike settle in to celebrate at Boshamps Seafood & Oyster House, the restaurant that hosted the event. The 2016 Destin Flathead Classic benefits the Austin Lacey Fund, a noble cause that is always accepting donations, in and out of cobia season.

Over 130 cobia were reeled in over the span of the four day long competition but there are still plenty more fish to be caught out on the charter boat Backlash! Cobia tend to stay close to the surface of the water, only diving to swim with stingrays and leatherback turtles. So whether you’re a seasoned veteran of fishing or an onlooker who is just along for the ride, there’s plenty to see and do. The state record cobia was caught right here in Destin, weighing in at a whopping 130.1 pounds, so we recommend bringing a couple friends to help reel in the lunkers!

The weather this weekend is going to be perfect for getting some fishing in as well as some quality time with friends and family. Here at Destin Offshore Charters, the Backlash crew would be more than happy to share in those happy moments. So come aboard and get your sea-legs, enjoy some good company while you fish the legendary cobia of Destin, Florida. And don’t forget to mention cobia when booking a trip to take advantage of our seasonal specials. Don’t let this opportunity be the one that got away!

See y’all on the water!